Tips for trips during your stay

Best deals on our website only – Book direct and save

Explore the natural beauty!
Trakošćan and its green surroundings are full of adventure! It is an ideal destination for all of those who want to relax, explore, or engage themselves. It’s just up to you to embark on an adventure… One day is not enough!

Our team prepared a model schedule of your stay. We would be glad to assist you with organization.

Day 1 – arrival, accommodation in a room, enjoying the specialties of the hotel Trakošćan, an easy walk in a fairytale park forest

Day 2 – tour of Trakošćan Castle, museum display, detailed tour of all castle rooms and acquaintance with the history of the castle, lasts approximately 2 hours / visit to Bednja, tour of the Parish Church of the Asension of the Blessed Virgin Mary / relaxation in wellness / meals full of specialties of Hotel Trakošćan / Bike recreation around the hotel Trakošćan

Day 3 – recreational walk around Lake Trakošćan along the educational trail “Put vila/ Trail of Faries”, 5 km long, on the trail around Trakošćan Lake, can be seen with a light walk in about 2 hours. There are 20 educational points and a fishing house on it. The trail is also suitable for cycling and recreational running in the fresh forest air / Recreation on the tennis and sports courts of the hotel Trakošćan / after a walk and recreation refreshment in the restaurant of the hotel Trakoščan / swimming and enjoying the saunas

Day 4 – Ravna Gora hiking trail, starts behind the hotel, recreational climb through the beautiful forest Trakošćan – Vrbanići – Ravna gora, it takes about 2 to 3 hours to Filić’s home, and 2 to 3 hours to return to the hotel. Nice whole day trip, with delicious Trakošćanski pinklec (with various specialties) for enjoyment at the peak.

The starting point is the hotel Trakošćan, opposite the castle Trakošćan. Access by car for those coming from Zagreb is most suitable by highway to the Trakošćan exit near Macelj, and for those coming from the direction of Varaždin, by road through Lepoglava. The first marking is at the entrance to the forest from the hotel Trakošćan. A pleasant road climbs gently for 1 hour to the village of Vrbanići and through it to Kotarščak, where there is a crossroads.

From here there are several variants of the road to the top of Ravna gora. On the left, the road leads to Paskova klijet, the hamlet of Šveci and Veliki pećine (there is a variant of ascent by a wedge path, but also an easier forest road than Paskova kleta), and on the right the shortest variant via Meljan.

The easiest ascent is along the forest road from the Paskova klijet, which is located 10 ″ from the crossroads in Kotarščak, on the way to Veliki pećine. From the klijet, the marking leads through the hamlet of Paski, and after passing by a well (drinking water), the ascent continues along a cut road to the main ridge of Ravna gora.

From the place where the marking goes to the ridge 3 ″ to the left is the mountain house Pusti duh, and 5 ″ to the right is the chapel of St. three Kings and 5 more Filićev dom (PD Ravna gora Varaždin).

The variant over the Great Caves is the most attractive, but also the most difficult. About 10 ″ from the crossroads in Kotarščak, there is an intersection near Paskova klijet where the hiking trail goes through the hamlet of Paski to the mountaineering house Pusti duh, and on the left it continues a wide path by isohypsum towards the hamlet Šveci above Cvetlin. A little behind the hamlet, an alpine-style wedge path begins in the woods on the right, climbing 10 ″ through the rocks to the top of the Great Caves.

The variant over Meljana, the ascent to the top of Ravna gora, is connected to Filić’s home, and leads through the village of Meljana through vineyards and later through the forest along a long ditch.

It is best to use one variant for ascent and the other for descent.

tour of the Church of the Immaculate Conception of the Blessed Virgin Mary, Pauline Monastery, Lepoglava Lace Gallery – Since 2009, Lepoglava lace has been included in the UNESCO list of intangible cultural heritage of the world. International lace festivals, which are held every September, have a special significance in the promotion of Lepoglava lace.

Ivanec region was recorded as one of the first habitats of the human species. In the caves of Vindija, Velika pećina on Ravna gora, and Sever’s quarry near Vuglovac, finds from the oldest period of prehistory of mankind have been preserved.

Frišćićev mlin- ​​The mill was renovated in 2005. In the vicinity of the mill, there are two large sculptures by the original Lepoglava artist Dragutin Jamnić – Dragec, a three-meter high sculpture of miller Andrija with a basket of flour on his head and a sculpture of a water maid with braids, carrying jugs of water. At Friščić’s mill, you can get refreshment from a source of drinking water, which Jamnić called Jamnić.

The top of Ivančica is located at 1060 meters above sea level. It is the most common destination for mountaineers who visit Ivančica. Along with the Mountain Lodge “Pasarić’s House”, there are two lookouts at the top of Ivančica. From the smaller lookout point “Stričevo” there is a view of Ivanec, Varaždin and Međimurje. At the highest elevation of Ivančica, the “Pyramid” lookout was built, 10 meters high. The environment of the mountaineering facilities has been arranged, and wooden benches and tables have been set up for several hundred mountaineers and excursionists.

Day 6 – visit to Varaždin, the city is located along the river Drava, by the river there are picnic areas and promenades:

Varaždin’s feudal fortress Stari grad is the most important historical building in Varaždin. It was the center of a noble estate, owned and legally separated from the royal and free city of Varaždin. Today’s fortress was built from the 14th to the 19th century. The oldest part of it is the central tower. During the wars with the Turks in the 16th century it was rebuilt into the Renaissance Wasserburg, a fortress – a castle surrounded by high earthen embankments with bastions, surrounded by a double belt of water. The reconstruction was carried out in the second half of the 16th century by Italian builders from the vicinity of Como, led by the main imperial builder of fortifications on the Slavonian border, Domenico del Lallio. During the past, it was owned by many important noble families, the Counts of Celje, Ivan Ungnad, Juraj Brandenburg and the Croatian Ban Tomo Erdödy and his successors.

Sightseeing of the museum exhibition in the Old Town – cultural and historical department of the Varaždin City Museum keeps significant historical documents, valuable collections of guilds, weapons, stone monuments, glass, ceramics, clocks while walking through twenty rooms decorated in different styles of past periods brings back the spirit of past centuries. the way of life there

Museum of Angels – motifs of angels in a baroque atmosphere and artwork under the motto Varaždin-city where angels sleep, painter Željko Prstec in his hometown arranged a home for his own and other works on the spiritual and angelic world, along with the Franciscan Church.

Roman settlement Aquae Iasae. The public part of the Roman settlement was located on the uppermost terrace of the Toplica hill (today’s park), the residential part on the terraces that descend to the foot of the hill, and at the very foot were established craft and trade and fair facilities. 1953. The ancient department of the Archaeological Museum in Zagreb discovers a complex of Roman public architecture (1st-4th century), a swimming pool with swimming pools and a basilica, a forum with porches around the main thermal spring, and a capitol with temples of Jupiter, Juno and Minerva. A statue of the goddess Minerva was found in 1967 at the entrance to the temple. Specific soil conditions around the source of thermal water, travertine deposits, have preserved Roman architecture, so this complex is one of the best preserved sites in Croatia. The thermal sulfur water that springs in the area of ​​today’s park is extremely healing, with a temperature of 58 oC, and the findings show the use of the same source for more than 2000 years, from prehistory to the present day when the Special Hospital for Medical Rehabilitation is supplied from the same source. The researched parts of Roman architecture are located within the city park, ie the bathing park, which was founded in 1820 and at that time consisted of two parts: a decorative garden with a spring pavilion and a music pavilion on the ground floor (now an archeological site) and a landscape park on a hillside. which in the upper parts passes into a forest park. The portal at the entrance to the park was erected in 1865, and is decorated with a fragment of a nymph relief and a Roman inscription, and with two marble lions with fish tails. 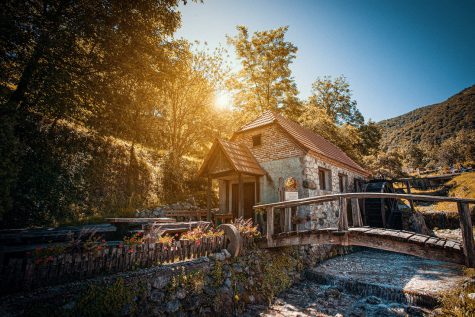 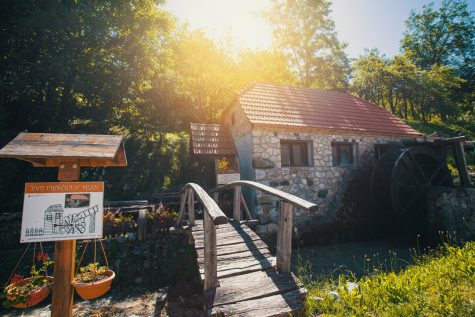